Weaving Architecture at the Hangar Exhibition 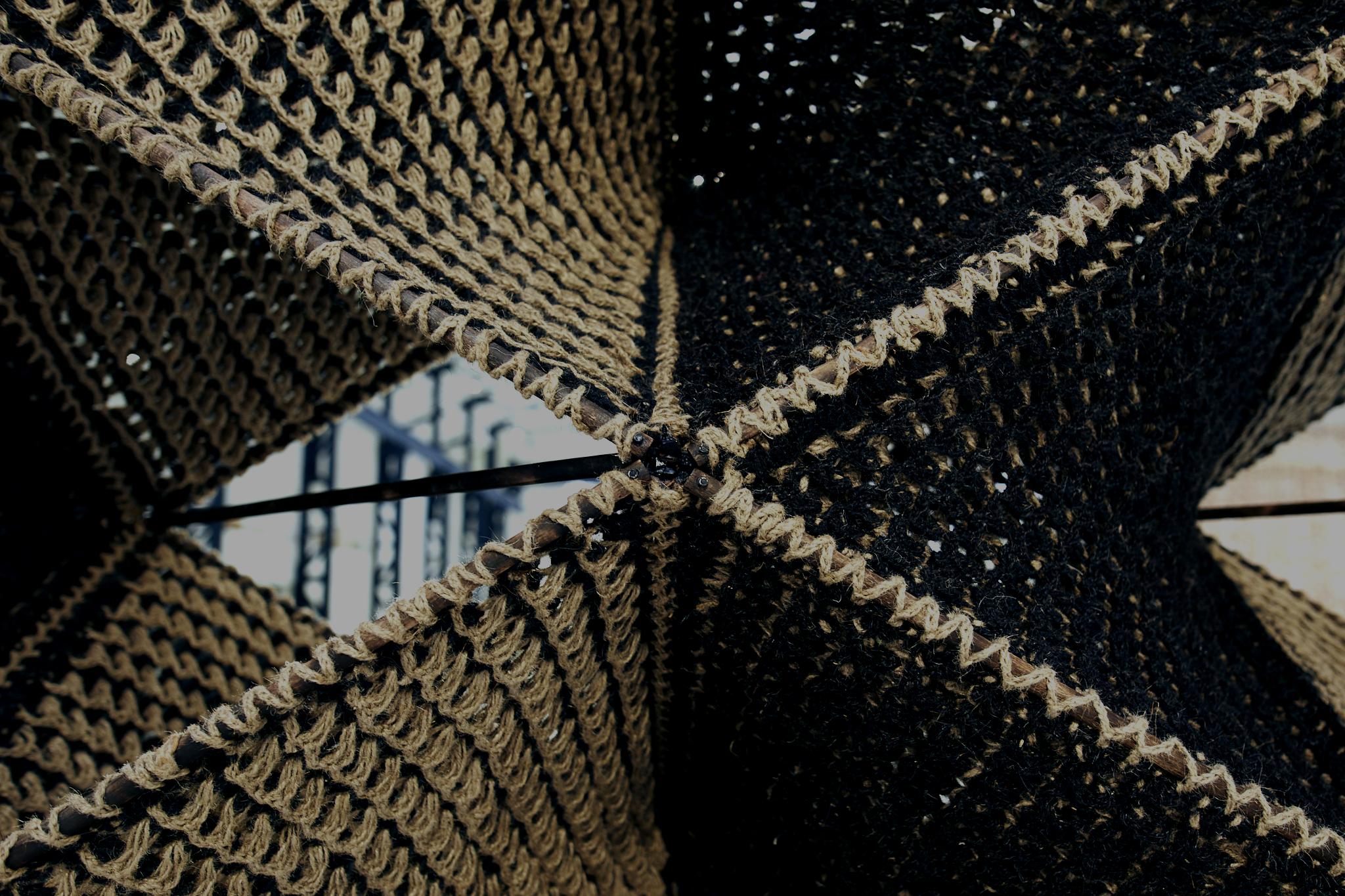 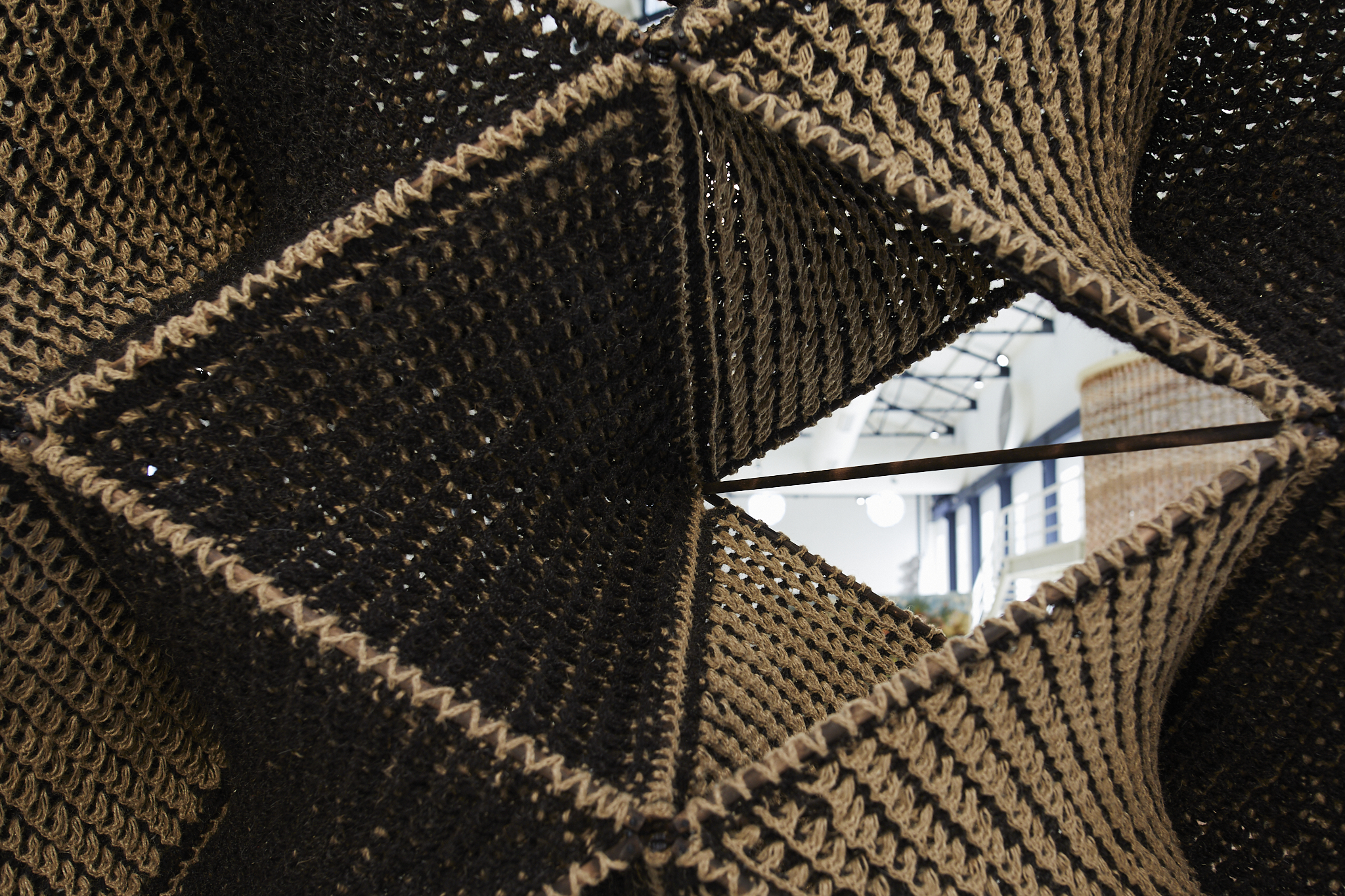 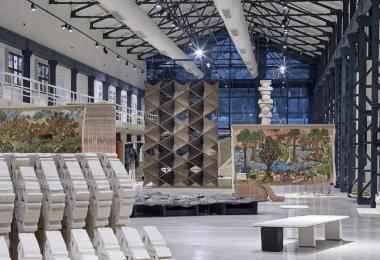 Abeer Seikaly, co-founder and former co-director of Amman Design Week, presents Meeting Points. Meeting Points is a working prototype for a reconfigurable composite material system, a tensility, and equilibrium of steel, wood, and fiber only made possible through each individual connection and the intuitive hands that created them. These different meeting points - between fiber and structure, material and space - arise in response to the design processes of Bedouin tent-making craft; communal practices of weaving and construction traditionally tasked to the Women of the tribe, the invisible architects in a patriarchal system.

Meeting points is a porous self-structuring tapestry, at both the scale of its dynamic lattice structure and the pliable hand-knitted geometric pattern which lends the material system its mechanical properties. Evolving through collaboration, it is another meeting point: one between designer and community. One which seeks to sustain the legacies of traditional design processes, passed down from generation to generation, within the contemporary and future canons of design knowledge in Jordan.

Jordanian textile artist, weaver, and wool researcher Ishraq Zraikat showcases her circular weaving loom, under the title Creative Being. This installation rethinks the possibilities of the local traditional weaving looms.

In architecture, numerous people and skill-sets are involved in building a home, whereas, in traditional Bedouin tent-making, the main skill is weaving, practiced by women exclusively. This work is a celebration of the making of the Bedouin home with all of its soft components – floor, walls, and ceiling – being woven simultaneously as one continuous textile, dressed over a wooden frame. The weaver sits inside this frame and weaves the circular warp. The home is being woven from within, inhabited as it is being created. As the woven textile grows longer, it rotates around the box, creating a woven space – the Bedouin home.

This work is supported by takween.

Hala Kaiksow is a designer living and working in Bahrain, and she is showing an interactive piece constructed of woven walls entitled A Room of One’s Own. In this piece, the viewer is invited to enter a world that is constructed of fabric; one that is both soft and tactile, but also rigid and structured. It provides a sanctuary and a place for personal reflection and brings the viewer back into the realm of the hand-made. Viewers are invited to enter the artist's world of textiles and the endless opportunities they bring, essentially making it “a room of their own”.

Using different materials to give new interpretations to weaving, Amman-based architect Hadeel Ayed Mohammad uses steel and wire to weave a Mashrabiya. The Woven Mashrabiya is a reinterpretation of the traditional Mashrabiya facade elements. It explores the possibilities of translating this historical craft into a contemporary modular system. The modular system allows endless possibilities for assembly, at different scales and configurations. By using light-weight materials, the modules can be arranged to create various forms of enclosures, planar facades, partitions, and shading canopies. This allows the system to re-adapt in different locations.

The modules are created by weaving wire through a base frame. By changing the base geometry of the frame, variations in aperture size, rotation and shape can be created. Transparency is manipulated to change the overall perception of a space and create variety in the amount of light permeating the facade, similar to the effects created in a traditional Mashrabiya.

This work is supported by takween.

Executed in a collaboration between Marrakech-based designer Amina Aguezny and 23 craftswomen (maalmates) from the Entraide Nationale of Bouznika, Skin was created in reference to traditional Moroccan arts and crafts during a two-week-long workshop, this piece calls on the transmission of ancestral know-how and vernacular techniques used for clothing, home decoration, furnishing, and ornamental trimmings, and others.

Skin also attempts to tell the story of these women who spend their time working in the secluded environment of their own home where they are by tradition kept hidden. Extensions of those passed down over the centuries from mother to daughter, the gestures they perform daily structure the life and work of each of them and constitute the backdrop of Skin. Throughout this collective work, their individuality, singularity, and sensitivity randomly graft to one another, just as many scraps of skin, to form some sort of feminine scar tissue, sensorial and sensual, that reinterprets freely a cultural heritage and reinvents the traditional Moroccan patterns.

This work was produced by Cultural Interfaces and is on loan from the collection of Bank Al-Maghrib (Banque Centrale du Maroc).