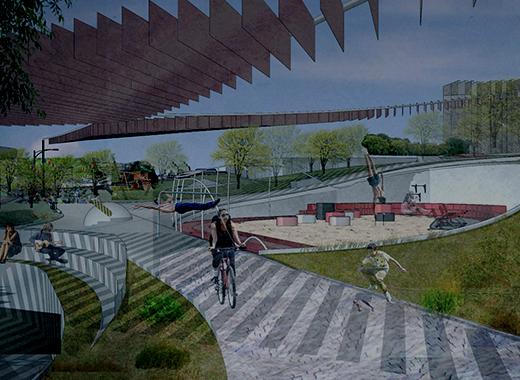 The jury reviewed a total of 28 submittals received by the ADW organizing committee. The jury selected the two winning projects as both proposals aimed to produce an iconic park. Both solutions presented compelling concepts that were skillfully developed and presented. The entry by Khammash Architects concentrated on developing a proposal based on a native landscape that is well connected with the surroundings urban fabric. It did not however propose a clearly designed platform for its proposed activities. On the other hand, the entry by Synergy Designs proposed a well designed program of sports activities and adventure play that complement the existing skating activities. It did not however, sufficiently develop the soft landscape component. The jury awarded both teams an honorarium from Bank al Etihad for a total of 2,500 JOD.

The two winning entries are:

Below you can read more about the architect teams and view their complete proposals.

The proposal extended the borders of the project to the surrounding streets and open pockets. It examined the entries and links with the surrounding context where the proposal widened the sidewalks and gave an open pedestrian space to the street at its furthest tip. It gave more transparency into the park through the design of the periphery iron wall. It also advocated low maintenance strategies and the selection of plants was based on the native trees of several regions of Jordan. The urban and ecological approaches are commendable in this project. These approaches are sorely lacking in the design of parks in Amman, and this project puts forward a compelling methodology.

Although the main programmatic requirements and related park furniture were indicated in the scheme, they were not clearly developed.

The character of the park is much related to the soft landscape of native trees and ruggedness of stone floors or walls, or the "sense of wilderness" expressed in the multipurpose space or intentional weeds instilled to the retaining walls. It is a romantic visual approach that is successful in some parts but needs to clearly present or address the functional needs of the users further in other parts (kids area, multipurpose space and greening of service buildings). Also, the character of the project will not be perceived until the trees reach maturity, since the trees are the key attraction of the project that create and define the spaces.

The berming of the services may be costly and the greening of the roof needs to be assessed in light of budgetary and maintenance requirements.

The diversity of activities and their coherent layout are the main successful aspects of the proposal. A true active and sport attraction is created to draw the youth of the neighborhood and of other surrounding areas: a cycling track, a basketball court, a children’s zone, and climbing walls. It is also an extroverted project to a great extent, with high transparency which lends the feeling of security.

The development of the soft landscape, especially of the masses of trees, is the weakest in this project. Also, the main retaining wall is not always treated as an asset to the project.

The estimated cost of the project is not realistic considering the civil works that would be required to execute it. A phasing approach may be needed. Moreover, the project did not also accentuate the links to the surrounding streets.

To see the other 26 proposals: